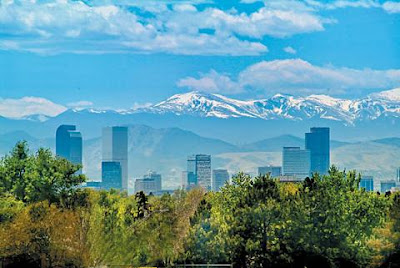 DAM paintings by Clyfford Still.
Remember my post about Domo in Denver? My Friend Nick had turned us on to it's charms. I mentioned a little article he was doing for Time Out Chicago. Here it is, printed in it's entirety!
Denver, CO
Head to the Rockies for culture, beer, and this week, Democrats.
By Nick Sustana

Could there be a better place for this year’s Democratic Convention than Denver? It’s young! It’s progressive! It’s environmentally aware! And it’s a former cow town, so residents are used to the place occasionally reeking of manure. But whether you come to Denver for the convention this week or just to take in the Rocky Mountain vibe, you’ll find plenty to keep you occupied.

Before strolling around downtown, check into the ultracampy Curtis Hotel (1405 Curtis St, 303-571-0300, rooms start at $139). If you’ve ever longed for a hotel with Slinky/Darth Vader/Vanilla Ice decor and Austin Powers wake-up calls (who hasn’t?), this is your place. Included with the kitsch are spacious rooms with modern perks like flat-screen TVs and iPod speaker systems.
When you’ve had enough pop culture, go enjoy some actual culture in the Daniel Libeskind–designed Hamilton Building at the Denver Art Museum (pictured above left, 100 W 14th Ave Pkwy, 720-865-5000). Designed to mimic the peaks and crags of the Rocky Mountains, the Hamilton Building is as visually stimulating as much of the art it contains.

A few blocks over is the Colorado History Museum (1300 Broadway, 303-866-3682). Check out the photos and biographies of Colorado’s more unusual characters, like Alfred Packer, the notorious cannibal who ate five men after getting caught in a blizzard during an 1874 expedition. (Conventioneers beware: All five men were Democrats.) Fans of suffragettes and sinking ships will enjoy the Molly Brown House Museum (pictured right, 1340 Pennsylvania St, 303-832-4092). “The Unsinkable Molly Brown” was a famous Denver social activist made even more famous after surviving the Titanic.
Ready for lunch? Go Italian at Osteria Marco (1453 Larimer St, 303-534-5855). Enjoy a platter of housemade cheeses and house-cured meats before tearing into a hand-tossed wild mushroom and Robiola pizza.
For shopping, skip the Museum of Corporate Conglomerate Junk that is the 16th Street Mall and instead walk over to Rockmount Ranch Wear (1626 Wazee St, 800-776-2566), home of the original western snap shirt. Rockmount devotees include Eric Clapton, Bruce Springsteen and scores of Hollywood A-listers. As a side note, 107-year-old founder and CEO Jack Weil worked at the store daily up until he passed away last week.
If your tastes lean more “urban” than “cowboy,” check out the shops just east of downtown along Colfax Avenue. The neighborhood is seedy enough to make you feel cool and alternative, but not so seedy that you’ll be pummeled by thugs. Two blocks away, Wax Trax (638 E 13th Ave, 303-831-7246) serves up a healthy dose of obscure CDs and 45s. Soul Haus Menswear (226 E 13th Ave, 303-830-7685) offers affordable apparel for goths, skate rats and even plain old hipsters.
A five-minute cab ride puts you at South Pearl Street, a more upscale shopping area tucked into a charming residential neighborhood. The 5 Green Boxes (1705 S Pearl St, 303-282-5481) overflows with quirky housewares and gifts. Save the planet and look good doing it with the ecofriendly and fashion-conscious clothing at Unity (1455 S Pearl St, 720-570-5076). Hit Gaia Bistro (1551 S Pearl St, 303-777-5699) for a tasty ancho-loganberry barbecue duck sandwich or fresh crêpe if you need a bite to eat.
When dinner hour calls, Potager (1109 Ogden St, 303-832-5788) answers with locally grown, seasonal ingredients prepared in outstanding dishes like its smoked quail salad. For an authentic taste of Japan, try Domo (1365 Osage St, 303-595-3666). Traditional country dishes, sprawling gardens and an accompanying museum of Japanese folk art make this one of the most intriguing restaurants in Colorado. (Fair warning: The chef is an artiste. Your request for soy sauce may result in a five-minute lecture.)
Denver brews more beer than any other city in the country, so it’s no surprise the bar scene is jumping—almost to the point that you’ll contemplate staging an intervention for the entire city. Watering holes abound in the LoDo District just blocks from the Curtis. Grab a frosty Obamanator Maibock Lager (or three) at the Wynkoop Brewery (1634 18th St, 303-297-2700) then head to the living room–size El Chapultepec (1962 Market St, 303-295-9126) for cold beer, sketchy Mexican food and arguably the best jazz in Colorado. Wind down your evening at the refined, yet relaxed Cruise Room (in the Oxford Hotel, 1600 17th St, 303-825-1107). The bartenders pour stiff cocktails and regale you with stories about the bar’s history, such as the fact it opened the day after Prohibition was repealed in 1933.
After a few days, you’ll appreciate Denver’s transformation from a rugged old western town to an up-and-coming urban hub. And no matter what side of the political aisle you’re on, that’s change you can believe in.
THE TABTwo nights, two peopleAirfare $476*+ Lodging $278 + Meals $200TOTAL $954
Posted by Kierstin Bridger