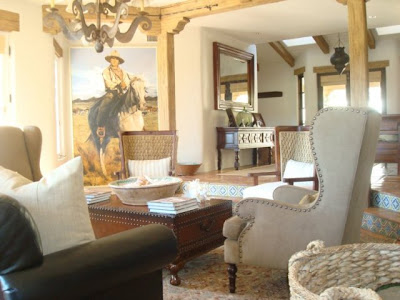 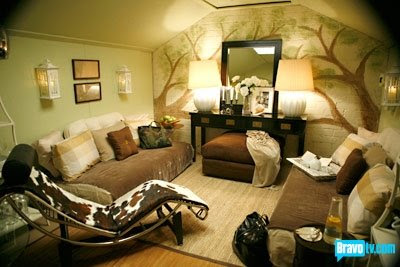 On Top Design this was Andrea and Eddie's winning room. Would the chaise make me hungry for a fresh, juicy, organic hamburger?
So- I know it wasn't "last night's episode" because I Tivo every thing- it was last night for me...
Top Design is great for so many reasons. Love the sweet and talented Todd Oldham, that kooky costumy Kelly Wearstler, the one of a kind Jonathan Adler and sassy little Margaret Russell.
I miss Jonathan's famous line from last season, "see ya later decorator"...but not too much.
Rick Schroder's wife, Andrea, is also on the show as a contestant. I am a little fascinated by her. I had a gi-normous crush on old Ricky back in 1983, '84, '85...Silver Spoons anyone?
He also had a ranch near here too. Her bio says they are creating some life-style properties in Western CO...hmmm 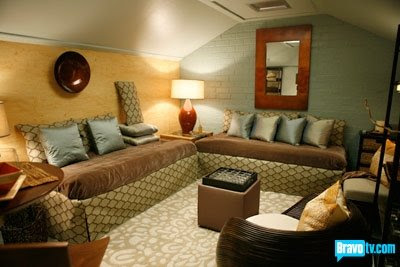 The last two images were from the bunker challenge. If I had to co-habitate in a bunker for up to 50 years- I know, bizarre challenge. I think I'd want a more sleek and sophisticated room- electronics (ebooks, pod casts, photo, music storage) hooked to a generator, sneaky spy stuff..., maybe a Murphy bed so I could fold it up and exercise, reversible fabrics and pillows, everything would have to multi-purpose. There was simply not enough time, or access to materials for the poor contestants to come up with anything but "pretty" rooms.
They never addressed food or the commode situation, hmmm...
I have a fantasy that my husband and I would make a good team on a show like that...but let's be honest I'd have a snarky moment and it would get broadcast and rebroadcast over and over, and he'd look like a saint for putting up with such a behavior challenged design diva- almost like real life!!