Cappellini - Stitch When stacking chairs seem passé, consider folding. Adam Goodrum's Stitch collapses accordion-style, thanks to hinges in the middle of the seat and back's lacquered-aluminum plates. The chair is offered in high-gloss yellow and red in addition to black, white, gray, blue, and a multicolored version. 212-966-0669; cappellini.it. circle 420 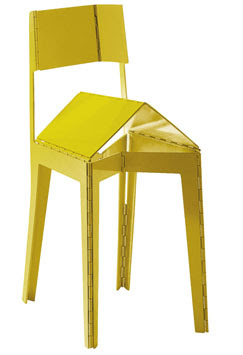 Who isn't bored with stacking chairs? If I had a nickel for every time I set up those damn passe' stacking chairs at the Ouray school or the Ridgway community center and thought..."wouldn't it be nice if the western slope could get behind some really hip folding chairs, especially accordion style." I would be wealthy beyond my wildest imaginings. Drowning in platinum bath water, baby!

I would thrill to see a room set up in all the colors- random- of course.....or oddly patterned. So cutting edge. So grown-up. I realize this is a totally mom thing to mention, but I do envision a few pinched fingers...

As a former floral designer, I appreciate the level of artistry, vision and CHUTZPAH this took. Wow.

Orange tones dominated David Beahm’s table design for the Lenox Hill
Neighborhood House’s “Once Upon A Time” gala, which raised $1 million for the
organization at the Park Avenue Armory in New York. Photograph: Neil
Rasmus/Patrick McMullen 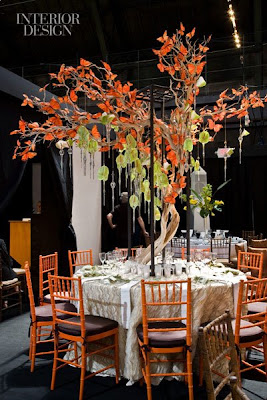